So Christmas is just under 2 weeks away and it’s pretty insane how this year has flown by, especially the last few weeks. I was really surprised the other day as my sister surprised me with an early Christmas present! This has become a bit of a tradition for us as it is almost ALWAYS baking related so I can use it to make some sort of Christmas baking for presents.

This year she bought something I didn’t even know existed! A personalised rolling pin (for the final roll) which says Made by YB. 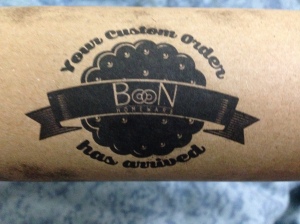 I’m excited to use this as I’m making shortbread so I think it’ll be nice to personalise it. I’ll definitely let you know how it goes. The plan is to roll it out using a normal one and then rolling over with this to imprint onto the surface. So happy 🙂

My baking plans are a bit crazy this year. I’m baking for slightly more people than usual (though the hamper for my Aunt is being made later as this year we won’t be seeing her until after Christmas). I’m making a total of 9 hampers of various sizes and I’m planning on making a start on them after my exam on Thursday.

I made my Christmas baking list yesterday and it’s absolutely insane! Luckily I bought The Mirror yesterday as it has a £15 off voucher (on a £75 shop) so I’m going to hopefully get a bulk (if not all!) of the ingredients as well as some bits for Christmas and a food shop as well. We’ve changed our Christmas plans a bit this year and will just be having a quiet one at home so Dad’s in charge of the turkey and I’ll probably be in charge of side dishes.

Also on the 28th I’ll be having a few friends over for a Christmas dinner/roast. We’re cooking for around 10 people so the plan is that we’ll do a roast rolled belly pork with stuffing, roast new potatoes, Dauphinoise potatoes (sister’s request), carrot and swede mash, sprouts with bacon, pigs in blankets, roast parsnips and gravy. We were going to have turkey but I only have a small oven so I figured belly pork would take less room (and less cook time!). We’ll be having an afternoon of playing board games and watching films and everyone is bringing an item for Chinese hotpot so it’ll be nice spending a lazy day with them. I mentioned that our friend is moving back to China, so this will also kind of be a leaving party for him so hopefully the food will be good!

What are your Christmas plans? Are you more chilled about it or do you enjoy taking everything on? Let me know in the comments 🙂

Until next time.. x